What follows is a report of the activities carried out with the invaluable contributions of the Antipode Foundation International Workshop Awards. 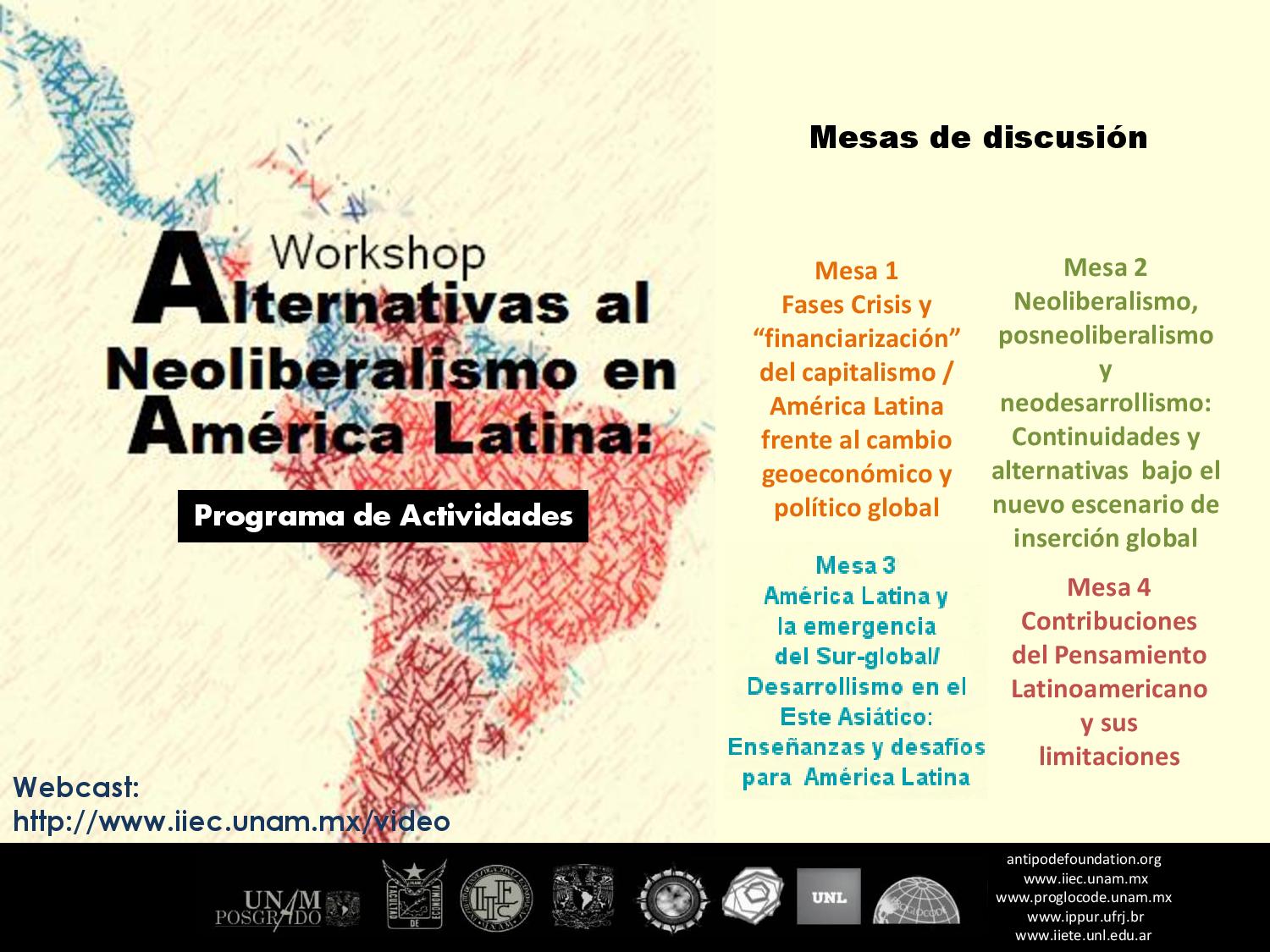 The 35 papers presented were organized in five main issues: 1.Phases, crises and financialization of capitalism. Latin America confronting the global geoeconomical and political change; 2. Neoliberalism, postneoliberalism and neo-developmentalism: continuities and alternatives under the new scenario of Latin America global integration; 3. Latin America and the emergence of the Global South. Developmentalism in East Asia: lessons and challenges for Latin America; 4. Contributions from Latin American thought and its limitations; and 5. PhD and MA students’ papers.

At the end of the workshop there was a roundtable dialogue, named “Alternatives to neoliberalism in Latin America”, where the main conclusions were presented publicly, creating a common research agenda for the future around the following issues:

1. Latin America development can only be understood within the framework of capitalism’s structural transformation, even though its proactive study also includes conditioning factors derived from the region’s countries’ historical paths of development and political-social forces;

2. Deep global geoeconomical-political changes have taken place recently, in which the geometries of North-South power have been modified by the unprecedented growth of the Global South (constituted until recently as the global accumulation dynamic core), even though the latter’s heterogeneous growth dynamics have produced a deep divergence between East Asia’s and Latin America’s performances. As a whole, those dynamics have brought about significant global geographical space changes;

3. The neo-developmentalist experiences of South America presented persistent difficulties to the transformation of the dynamics of capital accumulation, in which some aspects of rupture but also of continuity with neoliberalism were observed;

4. The neo-developmentalist experiences brought about a reactivation of the political and academic debate concerning the difficulties and deterrents of development linked to state action, and the economic planning capabilities of the latter, both inspired by Latin American social thought. This thought, however, did not systematically address the problem of social space, about which it only warned of the need of incorporating the national space into the development process (within the framework of “center” and “periphery”) and;

5. An approach in terms of development and state action is incomplete if it does not consider the spatial dimension of socio-economical processes, which involves a rethinking of Latin American national and macro-regional spaces in a multiscalar perspective, within the framework of local-regional and supranational dynamics, as well as the geoeconomical-political changes of contemporary capitalism.

The main result of the workshop was the formation of the academic social network “Latin American Socioeconomic Spatial Development Network” (REDSLA), integrated by both the academic participants of the workshop and new academics. The network was articulated around the four thematic axes that guided the discussions at the workshop.

In 2016 REDSLA applied to the Consejo Latinoamericano de Ciencias Sociales (CLACSO: VIII Convocatoria Para La Conformación De Grupos De Trabajo CLASCO 2016-2019), in order to give a more transcendental and organic form to its discussion program; REDSLA was awarded with the CLACSO Working Group recognition. The “Development, Space and Global Capitalism” Working Group, consists of five working subgroups: 1. Latin America and the global geoeconomical and political change; 2. State, development and post-neoliberalism; 3. Latin America and the emergence of the Global South; 4. Contributions and revaluation of Latin American thought; and 5. Territorial and urban problems in Latin America within global capitalism.

The Working Group is constituted by more than 70 academics (researchers, PhDs and MA students) of several disciplines (economy, political science and geography) belonging to eight countries (Mexico, Brazil, Argentina, Ecuador, El Salvador, France, Switzerland and Germany), and we are currently constructing a website (http://www.redseela.com), funded with part of the Antipode Foundation resources awarded to us.