On 27 February 2012, London’s Occupy LSX was evicted, as was the School of Ideas. At the time of writing, only the protest camp at Finsbury Square remains. Justifiably, much of the subsequent issue of the movement’s paper The Occupied Times  focused on the rise of homelessness in the capital, touching on the thorny but fertile never-ending debate on the difference between occupying as a gesture of political protest and squatting as a direct action response to housing need (see The Occupied Times 2012). Thanks to the highly mediatised events that surrounded Occupy, much has been written about the embodied politics of collectively reclaiming space and their powerful and emancipatory potential. All too often, however, these reflections conflate spatial politics with the ‘public’ gestures of outdoor protests, leaving aside the crucial ‘private’ politics of living, i.e. the cost and availability of decent housing. Even when homelessness is debated, housing politics remain significantly marginal in the organising language and demands of the many movements that currently preoccupy British cities***. 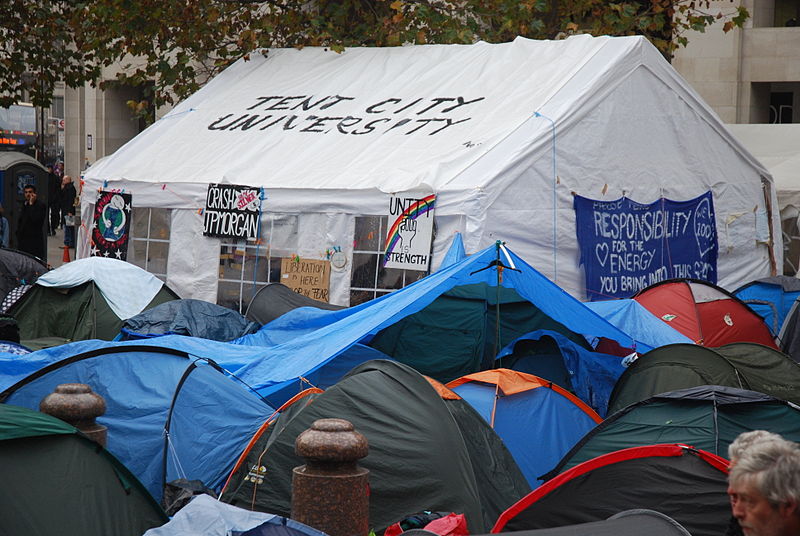 This work is licensed under a Creative Commons Attribution 2.0 Generic License.

The current crisis in London (and in the UK) is deeply intertwined with a crisis of housing that has been in the making for several decades and that is only being aggravated by the accelerated transfer of public housing stock from cash-strapped local authorities to private developers and housing associations; by the cap on housing benefits; and by the increase of social rents to 80% of market value. As the city population is predicted to increase, so are private and social rents, and with them a dramatic trend of evictions and homelessness (see Shelter 2011). At the same time, the ideals and practices behind state-funded social housing, with the perceived failures of its mass-designed and mass-produced solutions, are perhaps a past too recent to be idealised as something to strive for. So we discover an impoverished language for collective debate, confused demands, and increasingly individualised experiences of housing uncertainty as personal failure. Why do we seem to be left with only individual expediency, making do with unfair conditions and unable to make ‘housing’ the first item on a collective agenda?

Not ‘what is your job’, but ‘how do you make a living’

Between November and December 2011, a group called Precarious Workers Brigade (PWB) facilitated a series of open assemblies on the question of ‘precarity’ at various spaces of Occupy London. These open debates were meant to introduce and discuss precarity as a political issue and to collectively explore its relevance in relation to the personal experiences of participants in the Occupy spaces and assemblies.

During the early workshops the conversation had turned almost inevitably towards labour precarity and to whether workplace organising remained an effective strategy for resisting job insecurity and the expanding casualisation in recessional cities. This focus on work, partly sparked by recent public sector strikes, reproduced a decade-old interdisciplinary debate on the notion of precarity as a tool for political mobilisation (see Neilson and Rossiter 2008), which has recently come to the foreground in the English-speaking world through Guy Standing’s (2011) argument on the rise of the ‘precariat’. But there was a shared sense among participants that this work-centred approach to precarity was unsatisfactory and told only a partial story, both theoretically and politically.

During the PWB’s last assembly at the occupied Bank of Ideas, a formerly vacant UBS building in trendy Shoreditch, participants were asked to share how they made a living, including but moving beyond their work identity. Unsurprisingly, most participants were used to ‘flexible’ employment and made their living drawing from different income sources, juggling spells of unemployment and freelancing, as well as relying on partners, support networks and intermittent housing or work benefits. Starting from personal narratives, it became evident that a working definition of precarity could not be limited to labour status and work-based processes of collective identification, but had to encompass other aspects of living. And as the debate unfolded, it was noted that the vast majority of the ‘precarious workers’ present were tenants, many of whom were on short-term, insecure tenancies, regardless of whether they were renting from local authorities, social landlords or the private sector. Shifting from ‘work’ to ‘living’, the precarity compass pointed again and again at housing, and housing uncertainty was identified as a major cause of distress and anxiety, against which even the ghosts of long-term unemployment seemed to pale. So why is housing precarity still not on the movement’s agenda?

A possible answer could be that existing housing debates are all but impenetrable to the mobile and unsettled, often transnational and migrant, populations that inhabit much of contemporary global cities like London. A forest of acronyms, laws, fragmented organisations, semi-geological layers of institutional politics, medieval landowning patterns, juridical incongruence, opaque and jargonistic planning subtleties – the landscape of housing politics is often inaccessible except to professionals and long-term local community groups. The temporalities of housing struggles demand to identify and engage with a more or less stable topological coordinate, something that precarious workers may not be able to meet precisely because of their precarious life/work situations. How can a precarious urban population even begin to tackle an issue that requires the temporal and organisational horizon of decades?

The struggle of precarious workers to find adequate representation at the level of trade union organising is reproduced and amplified in the housing debate as housing demands become increasingly the privilege of ‘permanent’ city residents. What is needed is a theory attentive to these limits to mobilisation and a corresponding practice that is able to transform life/work precarity from a barrier into the focus of contemporary housing struggles in global cities.

This is the second of what we hope will be many ‘freelance’ contributions. If you have an idea for a piece, please do get in touch.

***An important exception is the campaigning work carried out by Squash (Squatters’ Action for Secure Homes): http://www.squashcampaign.org/ Attempts to revive interdisciplinary academic debates on this issue include the colloquium ‘The Housing Crisis: Experience, Analysis, and Response’ held at Birkbeck College, London, 18 November 2011.