During the summer of 2013 mass protests against the politics of Turkey’s Prime Minister Erdoğan disrupted the country (Al Jazeera 2013a). The police retaliated with excessive force leaving several protesters dead and thousands wounded or imprisoned (Türk Tabipleri Birliği 2013). During the height of the protest, politicians from various EU member states commented on the violence committed by Turkey’s police forces. This intervention is not about the protests in Turkey, but the way Europe’s politicians responded to the Turkish police’s actions, what those responses reveal about them, and the implications of the discourse created. Referring to Derrida’s (1967) deconstruction theory, I argue that those responses were not just a critique of Turkey, but at the same time reveal the EU’s self-righteous understanding of a model of democracy. In their loud and often emotional critique, EU member states imply that the Turkish police’s actions and tactics are strange to them, and, indeed, that Turkey shows undemocratic tendencies. Thus, different EU countries create a discourse suggesting that they are the democratic binary opposite to Turkey.

This belief appears to be so deeply rooted within Europe that Emma Bonino, Italian Minister of Foreign Affairs, quite arrogantly speaks of a “‘graduation exam’ for the Turkish government” (Italian Ministry of Foreign Affairs 2013) and the German chancellor Angela Merkel was ‘shocked’ (“erschrocken” in the original quoted in Zeit Online 2013) by what was happening during the protests (and given the budget cuts to the welfare state and the continuous repressive politics against refugees under her government it seems difficult to shock her). Here are some further examples of EU state responses to the struggles in Turkey:

Angela Merkel: “what currently happens in Turkey does not represent our ideas of freedom of demonstration” (quoted in Spiegel Online 2013); “a Turkey in the 21st century has to accept that people can have different opinions” (quoted in Handelsblatt 2013).

“The UK Foreign Office [sic] called for restraint and urged the government not to use tear gas ‘indiscriminately’” (Sky News 2013).

Emma Bonino: “the use of force and the arrest of 20 lawyers are not acceptable. The right to non-violent protest is a vital pillar of democracy…Turkey must decide if it wants to become a mature democracy…This is perhaps the first serious test of the soundness of Turkey’s democracy and its European accession process” (quoted in Italian Ministry of Foreign Affairs 2013).

That the EU in general, or individual member states, perceive themselves in such ways will probably not be news to the readership of Antipode. But rather than being yet another deconstruction of an Orientalist, Eurocentric discourse (see Said 1978), this intervention develops the point further and argues that the paradoxical understandings of police violence shed light on the limits to, and uneven articulations of, liberal democracy. The critique by politicians not only reveals institutionalized Eurocentrism, but also legitimates police violence conducted by Europe’s own forces. We know that different member states of the EU use very similar tactics to those practiced by the Turkish police. They both use weapons to stop or quell demonstrations, and routinely commit acts of violence. Pointing the finger at Turkey suggests that within the EU similar practices are not commonplace, and being shocked by the undemocratic Turkish police tactics implies the EU’s police are law-abiding, disciplined forces. This is not the case, Europe’s police can and do also show an aggressive face (often hidden behind balaclavas) and force comparable to Turkey’s police (although arguably the violence is not of same the scale and intensity). In fact, in many cases of police violence within the EU, force is used to suppress demonstrations – demonstrations that are initiated to critique and question the same politicians who now criticize Turkey (see, for example, G8 or G20 meetings and climate conferences). Yet when police violence is committed within an EU member state, the parliamentary critique tends to emerge from either parties on the far Left of the political spectrum or individuals within the more established parties who often have the reputation as conspiracy theorists, constant quibblers, or unpatriotic citizens.

To be clear, there is no doubt that the actions of the Turkish police were horrific. My thinking is not meant to tabulate and compare the number of deaths or to record the exact chemical composition of teargas in order to establish which country’s police force is worse. Rather, I seek to disrupt the self-legitimizing, Eurocentric discourse put forth by politicians in EU member states in order to draw attention to and provide a critique of all forms of police violence. When politicians create such a Manichean discourse of good/bad, democratic/undemocratic, etc, etc. we need to disrupt it rather than taking sides within it (see Fanon 1961), in order to challenge state violence. Consider the following examples (taken from a long list that does not include everyday repressions against foreigners and the policing of ‘Fortress Europe’):

Germany: Standard equipment of the county’s riot police is the notorious tonfa baton. Different to regular batons, tonfas, if spun, can develop more force and cause severe damage. In addition, riot police make increasing use of large canisters of highly-concentrated pepper spray. As the reader of left-wing online news portals such as indymedia.org will discover, the police make use of both weapons on a regular basis against anti-fascist and anti-capitalist activists, injuring both peaceful and not so peaceful demonstrators alike. The smallest percentage of those events makes it beyond the local news or a brief mention in the mainstream media.

Denmark: The climate summit COP15 in 2009 in Copenhagen saw the Danish police force granted the right of pre-emptive arrests. The police could arrest ‘suspicious’ people who could commit a crime in the future. About 2,000 protesters have been arrested under this new legislation. One year later the decision has been ruled illegal by a Danish court and the police have started paying compensation (The Guardian 2009; Schueneman 2012).

Greece: During the protests in 2008 that followed the death of student Alexandros Grigoropoulos’ in a police shooting, the police force made such excessive use of teargas that they were running out of grenades (Sueddeutsche.de 2010).

Italy: 12 years after the Italian police’s excessive violence against demonstrators during the 2001 G8 summit in Genoa (which included a death, and the torture and humiliation of many) it becomes evident that the fascist Korpsgeist of the Italian justice system and Carabinieri still prevails: no significant changes or consequences occurred (Amnesty International 2011; Monroy 2012 Tagesschau.de 2013).

With these cases in mind, I recall a DIY patch a friend of mine made for me, which I used to wear on my backpack. It read “your freedom smells like teargas”, and depicted a barcode and gasmask (see Figure 1). Inspiration for the patch came from our experiences as protestors of the 2003 G8 summit in Evian and the several hours we endured in the teargas clouds. At the time, for us the “your” on the patch referred to the G8, the state and its police, and capitalism in general. When reading the hypocrisy and arrogance Angela Merkel and others showed in 2013 with regards to Turkey – as they incite and support police violence across the EU – I feel that it’s still time to tell global political leaders: Your freedom smells like teargas! 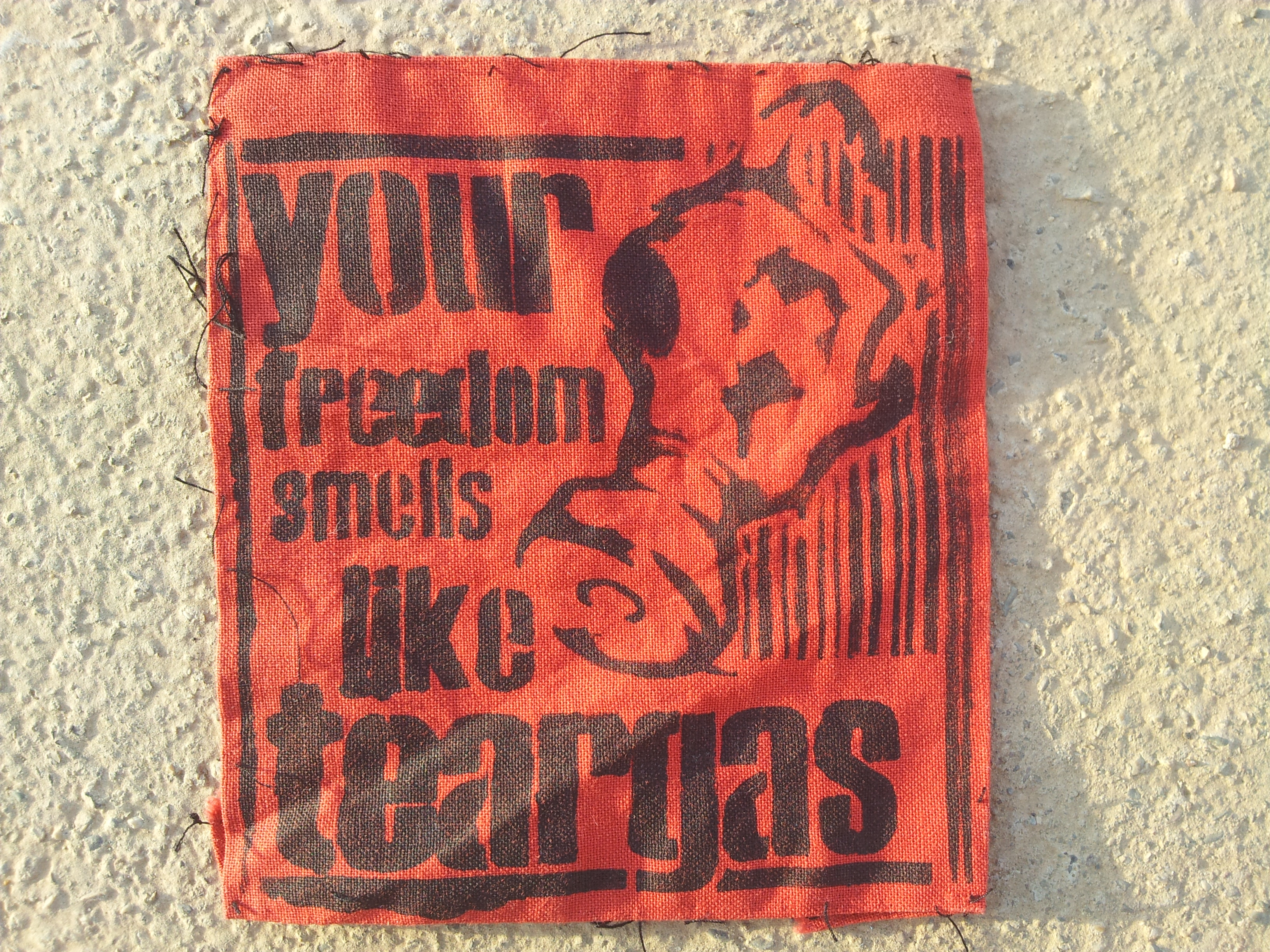